Home > Cases > Brabantia: brand positioning as a compass of change

Brabantia: brand positioning as a compass of change

At the beginning of 2011, we received a question from Valkenswaard. Or we wanted to help develop a new brand positioning for Brabantia. Tijn van Elderen would take over the helm from his uncle Christ from January 2012, and was mentally preparing for this.

Brabantia used the slogan 'Solid Company' in those years and the future CEO thought it was time for a change. I first had to present the proposal to the incumbent management: Tijn wanted them on board before he would succeed his uncle. A few months later we started working together with a specially formed project team. At the end of 2011, this resulted in a new positioning with 'Designed for Living' as the brand essence.

Ten years later, family business Brabantia has transformed from an introverted production company into an outward-looking, design-driven organization. In a conversation with Tim van Elderen I look back on the role that the new positioning has played in this.

“We had become so solid that we no longer moved. We had solid products, very solid people, and very solid finances. We had achieved what we wanted to achieve. And because of that we had lost 30% of the turnover.'

This is how Tijn opens the conversation. 'We had become a sleepy family business in Brabant. It was time for a new strategy. But you can have such a good strategy, without the right culture you won't get it done. Culture eats strategy for breakfast, that's what Peter Drucker said. I would say: culture eats strategy for breakfast, lunch and dinner. But if you succeed in changing the culture with a good strategy, you can grow.'

'And we have done that – we have grown 60% in a market that is quite dense, where there are strong competitive forces, with Chinese producers entering the market with the same product, including packaging, at a price that is below our material price. So we always have to stay one step ahead.'

The interview will take place in the Brabantia head office on the Leenderweg in Valkenswaard, a stone's throw from the location where a new, sustainable building will be built in 2022. He takes a sip of tea and continues: 'And that's what those brand values ​​made for. We soon had three basic values ​​that we immediately agreed on: reliable, conscientious and flexible.

But it had to be more exciting. So it was necessary to add two aspirational values ​​to that: progressive and surprising. And then to bring those values ​​to life.

To begin with, we hired a dozen people who also represent the top two values. People who dare to be really creative. Then you see that with a small group of people you can reach a critical mass to also get those last values ​​​​in the culture of the company.

But it will take at least five or six years for something like this to become ingrained in the company. Not only the brand values, but also the value proposition that we have developed together with Branddoctors: 'Designed for Living.'

Van Elderen has worked very hard on that turnaround in the first few years since he took office. Only after about three years, when the change gradually became visible, did he start looking for publicity. Where Brabantia was mainly known in those years for the indestructible, purely functionally designed stainless steel waste bins and lunch boxes, the course was shifted to attractively designed household products in modern color schemes.

In recent years, Brabantia has often won prizes for this, including the Dutch Design Award in 2016 and a Good Industrial Design award in 2019 for the Bo Touch Bin, which was accompanied by a Special Award Originality, according to the jury report for 'promoting a waste bin into an elegant interior object'.

The value proposition in 3 layers

Design is an essential element in the positioning developed 10 years ago and summarized in Designed for Living. This is Brabantia's value proposition at brand level, consisting of three layers:

Brabantia only sparingly uses the brand essence as a slogan. Why is that anyway?

What role has this new positioning, with brand values ​​and value proposition at its core, exactly played in the transition process that Brabantia has gone through in recent years, and what was its own role in this?

Tijn illustrates this with an anecdote: 'I gave an internal presentation at the end of 2016, when we had our best year since the financial crisis. I showed them what we had changed and adapted: not only our brand, our products, the logo, the packaging, but also our logistics, we had adjusted production accordingly, adjusted our quality and testing procedures, right down to our ICT systems.

And then I asked them two questions:

Who of you would have believed me, three years ago, if I had said: This is what we are all going to do? No one raised their hand.

And then the next question:

So you see – people want to, but they need an beckoning perspective. They need the trust and the faith. That's what I mean by change management. If we had not continuously radiated that faith, we would not have achieved all of this. It's a pure repetition issue: just get on that soapbox over and over, over and over, and keep repeating. And a very important one when it comes to brand values: keep selecting and assessing based on them. So that sometimes also means saying goodbye to people. We never did that before.

Long-term thinking from the core

When the project started, way back in 2011, Tijn said to me: 'We don't necessarily have to take a sustainable approach with the brand. Thinking sustainably, we already do that automatically.'

The way in which this is now woven into the brand largely stems from the core of the family business: long-term thinking, Tijn's personal motivation to transfer the company to the next generation in a healthy condition. Brabantia has traditionally stood for sustainable products that do not break. And if something does break, they first see if it can still be repaired. That was and is the mentality of the company. From there, the move towards recyclability was a small step. Brabantia has been working on this for years and currently 90% of all products are Cradle to Cradle certified at bronze level.

In addition, Brabantia is increasingly presenting itself as a brand that wants to contribute to a sustainable lifestyle – or simply 'do the right thing', as the website says. Of course that starts with separating waste, for which Brabantia offers a range of solutions, but it also goes further. Many stock cans have clear markings to measure exactly the right amount. In this way food waste can be prevented. Up to and including the 'let it blow' thought: with the rotary dryers and drying racks from Brabantia you can dry your laundry in an economical way: good for the wallet and the climate.

In addition, the company, in collaboration with WeForest, a tree for every rotary dryer or drying rack sold. In this way, Brabantia really implements sustainability from its own core. The use of clean energy and investing in less polluting production techniques and water purification are part of this.

How does Van Elderen view the future? For Brabantia, as a real hardware producer, is the move from product to service relevant? And what role does data play with a relatively simple product such as a waste bin, or all those other plug-free products that the company develops?

Tijn goes into detail about this and indicates to start with that he does not believe in yet another product with an app: 'A waste bin that has a sensor to indicate how much is in it: that is nonsense, because you do it 10 to 20 times. open once a day and then you see it immediately.' So it's not in that. In the perspective of the future, Brabantia's mission plays an important role, and that mission has a broader scope than the hardware: to make life at home just that little bit more beautiful, more fun and more sustainable, assuming that household tasks take about 6 to 9 years. cost your life. Those tasks are never ending and most people don't necessarily like them. 'What if we could turn that chore into a ritual? A ritual that has a certain value, by making it more enjoyable or more meaningful?'

He then sketches a model on the flipchart in which the hardware is in the core, surrounded by a number of rings. 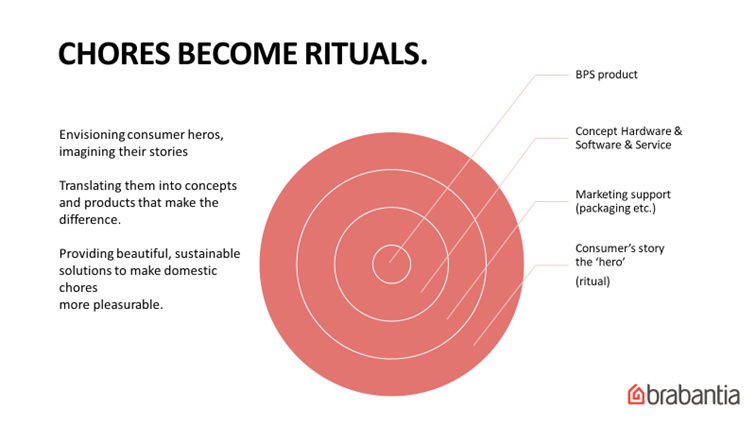 'At the core of Designed for Living is the product that must comply with Beautiful / Pleasurable / Sustainable. There is a marketing layer around it – such as the sticker on it, the badge, the packaging, everything we support with it. Then there is a layer around it, which I call hardware/software: that is the waste bag, the waste bin, the consumables. There is also money to be made with that.”

Brabantia has developed, among other things, a fully compostable waste bag, tailor-made for its own products. He continues: 'And around it is a layer, can you turn this into a meaningful ritual? And then the outer layer, which is about the services you can link to it.' In that outer ring, Brabantia is a link in a larger chain. Research projects are underway in this area in which the company, for example, collaborates with a waste processing company and looks at the separation of waste flows in the total chain.

The move towards services, new innovative collaborations with external partners: there is also plenty of promising prospects for the future. In addition, the existing business is running like clockwork because the Corona year 2020 has given a big blow to sales. The fact that people now spend so many more hours at home has increased the demand for beautifully designed products for everyday life at home and Brabantia can hardly keep up with the demand. Van Elderen, as a passionate visionary at the head of a wonderful family business, is far from finished at Brabantia, that much should be clear.

Throughout the conversation, a number of interesting lessons are learned that we would like to list for you. They are the drivers of change at Brabantia, with the new brand positioning as a compass

Don't miss a thing! Receive an update every quarter with our cases and events.